More evidence of how the big social media corporations primarily act to censor women’s speech, not that of rightwing misogynists, however much they claim to have standard policies about which speech is and isn’t permitted. (Types like Franklin Graham assuredly are ‘transphobic’, given that they help enforce male supremacy and compulsory heterosexuality. Meanwhile, when women use correct pronouns for people’s sex, we face censorship or worse.)

NB: Stop Trans Chauvinism opposed North Carolina’s ‘HB2′ Bill, on the grounds that it was an attack on workers’ rights, thinly veiled as granting women and girls protection against males ‘identifying’ their way into government-managed female-intended restrooms and locker-rooms. Allying with such types only hurts women and the gender-abolitionist cause. (See here and here.) Our stance was validated when North Carolina subsequently repealed the sections of ‘HB2’ that stipulated who could use which of those government facilities, but left other sections of the law in place. It is clear that the US ruling coalition, of capital and powerful rightwing Christian groups, is willing to use anti-trans rhetoric when it suits them, but ultimately is not acting out of concern for women and girls. 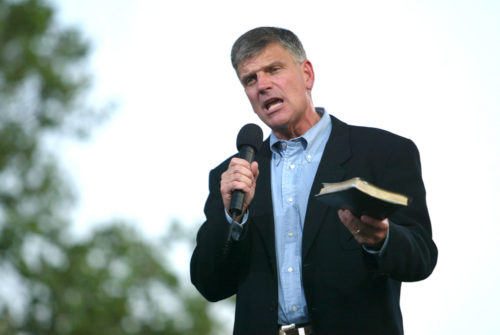 An anonymous spokesperson told The Charlotte Observer that Graham’s post was originally flagged over the site’s policy against “dehumanizing language” and discrimination based on “sexual orientation, race and other factors.”

However, the spokesperson said, “It was a mistake to ban Graham over a 2016 post he made on the site, and a mistake to have taken down the post.” They added that they’ll send an apology to the administrator of Graham’s Facebook page.

Bruce Springsteen, a long-time gay rights activist, has cancelled his North Carolina concert. He says the NC law #HB2 to prevent men from being able to use women’s restrooms and locker rooms is going “backwards instead of forwards.”

Well, to be honest, we need to go back! Back to God. Back to respecting and honoring His commands. Back to common sense. Mr. Springsteen, a nation embracing sin and bowing at the feet of godless secularism and political correctness is not progress.

Graham, of course, is peddling the lie that allowing trans people to pee in peace will increase sexual assaults against women and children. It’s an odious falsehood depicting trans people as pedophiles and sexual predators, encouraging violence against them. Furthermore, it has no basis in fact as studies have found no linkbetween trans bathroom access and sexual assault.

Following Facebook’s promise of an apology, Graham has crowed that “Facebook has a secret rulebook for policing speech,” adding, “Facebook is trying to define truth [and] … censoring free speech.” But he’s wrong again.

Rather, Facebook has a history of inconsistently applying its policies. Its 15,000-member content review team has a habit of banning LGBTQ content as “political” and forbidding people from discussing their own sexuality on its pages. These inconsistencies sometimes apply to conservative speech as well.

Graham is using that inconsistency as “proof” of Facebook’s supposed “conservative bias.”

But the truth is that Facebook disseminates conservative news more widely than any other content, and conservatives who complain otherwise are merely “working the refs,” complaining about unfair treatment to get Facebook to bend over backward to prove otherwise.